What is the Difference Between ASCII and Unicode? 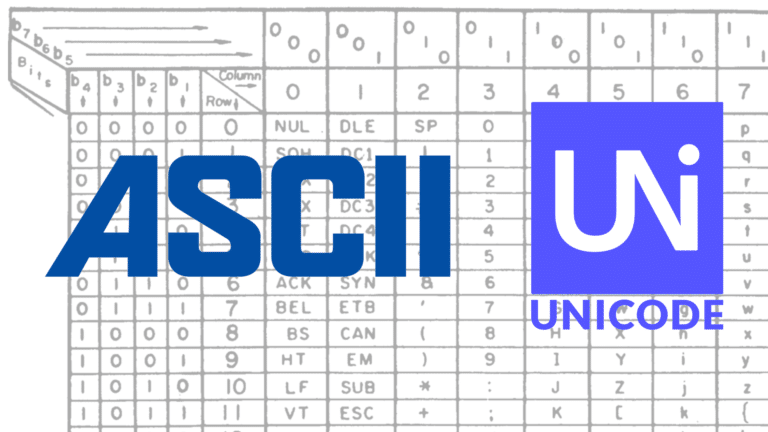 What is the Difference Between ASCII and Unicode?

ASCII and Unicode are the most well-known character encoding standards currently being used around the world. Both programs are exceedingly important in modern communications. When using an electronic communications device, data goes through the central processing unit that improves system performance by using main and cache memory. Peripherals utilize interfaces to communicate between the system and a connected device. Both encoding standards characters can be represented in binary. Characters are typically grouped in a character set. A character set includes:

Features of ASCII and Unicode

ASCII (American Standard Code for Information Interchange) was first launched in 1963. It has 128 encoded characters,which are chiefly in the English language that are used in modern programming computers. Because it hasn’t been updated since its inception, ASCII has less space occupied. It utilizes 7 bits of data to encode any character, was mainly used for character encoding on the World Wide Web, and is still widely used for modern computer programs like HTML.

It encodes text by converting it into numbers because numbers are easier to store in the computer memory than the alphabet. There is also an alternative version known as extended ASCII. With this technique, it is possible to use the most significant bit of an 8-bit byte to permit ASCII to present 256 characters. Programmers use the design character set to make certain tasks simpler. For instance, using ASCII character codes, changing a single bit easily converts text from uppercase to lowercase. It also uses some non-printing control characters that were initially intended for use with teletype printing terminals.

The Unicode (Universal Character Set) process, stores, and facilitates the exchange of text data in any language is considered the IT Standard used for encoding. Unicode represents and handles the text for computers, smartphones, and other technological equipment. It encodes a variety of characters, including a wide range of text in numerous languages, including Arabic, Hebrew, and Greek, historical scripts, mathematical symbols, etc. Unicode also supports a substantial number of characters and takes up more space in a device, so ASCII programming is a part of Unicode. Unicode utilizes 16 bits to represent the most frequently used characters in a multitude of languages. Developers typically exchange data using one flat code set without complex code conversions to read characters.

Support for Unicode provides many benefits, including:

Company Behind the Product & Support

In April of 2008, it MediaWorks, Inc. was legally absorbed by ASCII Corporation and formed the ASCII Media Works, Inc.

The Unicode Consortium is a non-profit corporation that develops, maintains, and promotes software internationalization, including the defining behavior and relationships between Unicode characters.

Apple created a scripting language called AppleScript in 1993. It enables users to control scriptable Macintosh applications. It also allows users to control scriptable Macintosh applications directly, and parts of macOS. You can create complex workflows, create scripts, automate repetitive tasks, combine features from multiple scriptable applications, and set of written instructions. AppleScript offers a limited number of commands. However, it also provides a framework where you can plug numerous task-specific commands (provided by scriptable parts of macOS and scriptable applications. AppleScript 2.0 is now entirely Unicode-based and contains all Unicode characters and is preserved correctly regardless of the language preference.

So which is better? All and all, both ASCII and Unicode are extremely useful, but ultimately, the choice is yours based on your preferences and requirements. ASCII is great when working with a small number of characters provided by the technique, as it needs less space than Unicode. Unicode is in high demand due to its large variety of features and functions and is more user-friendly. Both are excellent encoding techniques for different applications.