For WordPress, Cloudways is our favorite web host, hands down. They offer you a unique service that allows you to host your website on leading Cloud providers like DigitalOcean, Google, and Amazon Web Services. They basically allow you to run your own server from one of five premium Cloud hosting Solutions, and manage it through their platform. In addition, they add on high-quality support, managed services for WordPress, security, and collaborative features for teams.

Previously, we've discussed why cloudways is our favorite WordPress web hosting solution in depth. In this post, we're going to discuss each of the five choices you have for a cloud hosting provider, and which one you should choose.

We'll also compare Cloudways to hosting directly through one of these services. Finally, we’ll break down which plan on which server is the best choice for your business and website hosting needs.

What's the best plan for WordPress website hosting? It really depends on what the requirements of your website are. We're going to go over each of the five providers in depth, and discuss the using scenario for each of them.

The first thing to know is that each of these services are Digital Cloud providers. They offer a whole host of services, from cloud computing to security to storage. Cloudways allows you to automatically partition servers in these networks, which are automatically configured to support your chosen web application --  typically WordPress, but they have support for other products like Drupal and Joomla.

When compared to traditional hosting providers, Cloudways doesn't maintain the infrastructure, instead it acts as a conduit between you and the end service of one of the five providers.  Traditional hosting providers typically have their own data centers (which may not offer the same speed and scale that the industry giants can). As you will soon find out,  the Cloudways approach to web hosting for WordPress (at least in our opinion)  brings consumers much more value and offers a much more premium product at the same price point.

DigitalOcean, Inc. is an American cloud infrastructure provider headquartered in New York City with data centers worldwide. DigitalOcean provides developers cloud services that help to deploy and scale applications that run simultaneously on multiple computers. After Amazon and Google, it is the largest by market share (but note, it's much, much smaller).

DigitalOcean Droplets are Linux-based virtual machines (VMs) that run on top of virtualized hardware. Each Droplet you create is a new server you can use, either standalone or as part of a larger, cloud-based infrastructure.

Digital ocean is one of the cheaper services that cloud ways offers, which means if you're looking for the most economical option, this is probably the best choice for you.

We host our agency website on DigitalOcean through Cloudway's, and have never had any issues with anything.

Linode, LLC is an American privately-owned cloud hosting company that provides virtual private servers. It is based in Philadelphia, Pennsylvania.

Compared to DigitalOcean, they're smaller, but older.

Like CloudWays states, Linode offers a bit better hardware when compared to DigitalOcean, at a few pennies per hour more. In most situations though, you won't be able to notice a difference.

Vultr, founded in 2014, is on a mission to empower developers and businesses by simplifying the deployment of infrastructure via its advanced cloud platform. Vultr is strategically located in 16 datacenters around the globe and provides frictionless provisioning of public cloud, storage and single-tenant bare metal.

If you need security at a lower price point than the other two larger providers (mentioned below), Vultur offers this, and is a bit more expensive then the first two because of it.

Amazon Elastic Compute Cloud forms a central part of Amazon.com's cloud-computing platform, Amazon Web Services, by allowing users to rent virtual computers on which to run their own computer applications.

Mission critical applications that can never go down, for anything. AWS is so massive, it'll simply scale up to anything, and has so many redundancies, it'll (probably) never go down.

You need to pay for bandwidth, which adds up. This is a premium, yet costly option that will (probably) never have any technical issues on its end (there's a reason so many Fortune 500 companies use it).

This is the second biggest provider, but compared to Amazon, it's much smaller. It's pretty expensive, and from what we've found, there's not much reason to use it.

What's The Best Plan For You?

It really depends on the requirements of your website, but in most cases choosing the cheapest provider is a solid idea. We like DigitalOcean. The main difference nowadays between most cloud providers is the ease of use -- For example, a bare bones DigitalOcean installation may be a little more difficult to use than AWS installation.

Even when it comes down to hardware, there's not much of a difference. Most services use the same stuff (specific to hosting).

However, Cloudways removes this detriment by offering you a standard management platform that doesn't change between providers.

Obviously Amazon's infrastructure is the largest (it is estimated that Amazon has as much computing muscle as the next 11 rivals on the list combined), but if you're dealing with a website that has under 1000 pages, it shouldn't really matter. Once your website expand to be a massive enterprise style setup, then you may want to move on to Google or Amazon simply because of their size and brand.

The actual power behind the plan should change due to your website. With Cloudways, you can scale, so if you choose to small of a plan, you can simply move up the ladder. Example:

2GBs of RAM is recommended for all websites, so the $22/mo plan is a good place to start. If you're coming from shared hosting (without a noticeable issue due to the server), you can start at 1GB or RAM and work your way up. If you have an ecommerce site, the 4GB plan is a good idea because there's a lot of server site processing going on.

From taking a look at the equivalent plans (RAM, CPU, Server...) directly from the five providers, Cloudways is marking them up by about $10/month.

With the ton of additional add-ons the service brings, one click installation to five of the leading  cloud storage providers, and it's managed approach to your WordPress application installation, Cloudways is super powerful, but at the same time extremely simple and easy to use. If you're a developer, there are tons of powerful features that you won't see anywhere else, and Cloudways can seriously help speed up your workflow.  If you’re website owner, you can have a WordPress installation up and running in three clicks, using a simple to use graphical interface.  It's truly the best of both worlds.

In future blog posts, we will be comparing Cloudways to additional service providers like WPEngine and Pressidium. Keep an eye out! How To Migrate To Cloudways 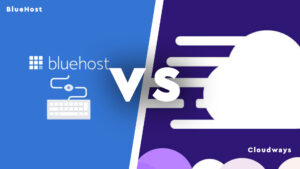 Bluehost VS Cloudways In 2022 Cloudways Hosting Review (2022) - From An Agency - Speed, Value and Price