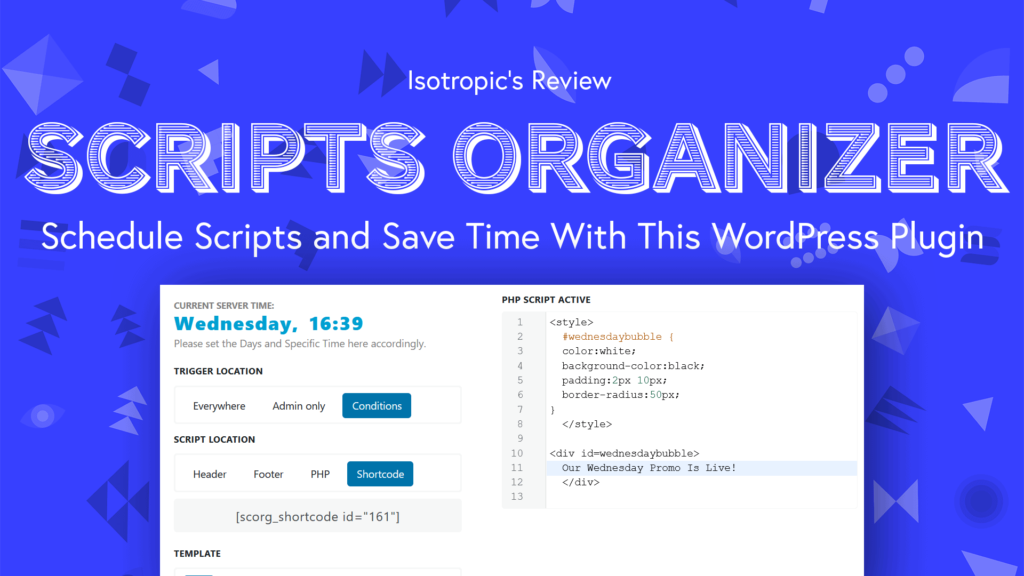 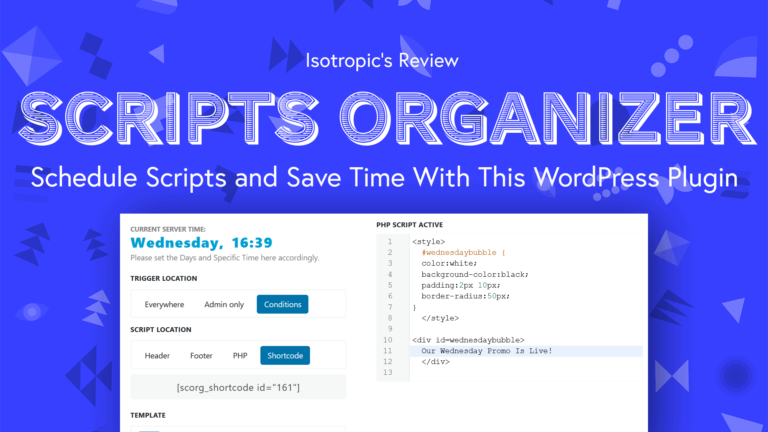 In this article we're going to be reviewing a tool that helps you schedule, organize and manage HTML, CSS, JS, and PHP code on your WordPress website. Scripts Organizer is created by the same developer behind the wildly popular “Swiss Knife Pro for Oxygen Builder”. While not specifically created for Oxygen, this tool slots into the ecosystem perfectly, and can save developers a lot of time and headaches. After using this plugin on several major projects for the past couple of weeks, let's take a look at the features, pricing, competition and more of Scripts Organizer.

First, if you're more of a visual learner, here's a 10+ min YouTube video reviewing Scripts Organizer.

Like this video? We do a bunch of WordPress tutorials and reviews. Please consider subscribing.

First, let's take a look at the features of this tool. Then we'll get into pricing and additional thoughts about it. Scripts Organizer comes with a solid collection of various components that work together to help you save time.

You have your standard toggle switches that allow you to turn on an office script manually. If you choose to use this tool without the scheduling feature, essentially becomes a more powerful/easier version of Code Snippets (discussed below).

The main feature is that we can schedule scripts to run on specific days, dates, ranges of dates, and times within a day. For us, we have used this feature extensively to set visibility, dynamically insert elements, call in third party tracking scripts during various campaigns, and more. Not only does this add to the end user experience by displaying time relevant information, but it can also speed up the performance of a website by only calling in assets when they are actually needed.

We can also conditionally set where this script will and up, giving us even more control. We can choose between specific pages, posts, individual post types, and taxonomies. For example, if I only want a script to show up on the about page at 3:00-4:00 on Thursday afternoon, I can do just that.

Choosing where this script ends up is also very easy. It's done by using a simple radio button, selecting either the header, footer, or a shortcode. This shortcode feature is something that I really enjoy, and use extensively in client projects.

Remember, that you can disable the conditions and scheduling too just have this short code throw in whatever PHP, HTML, and CSS you have created. But, make it even more powerful, you can use this in tandem with the scheduling and condition features for incredibly specific visibility.

You can also just insert PHP scripts, this is helpful when you have various snippets. When writing PHP, there is a safe mode that will not allow the script to run if it will break your website. This will save you perhaps hours of time troubleshooting the white screen of death.

The code editor is something that many are familiar with, a nice CodeMirror setup. This makes it easy to view, edit, and add code.

Finally, the tool has an additional feature (called Scripts Manager) with allows you to either insert from a CDN or upload your own CSS and JavaScript files. This interfaces directly with the standard script manager, meaning that you can schedule and apply conditional rules to third party files from a CDN.

And those are the major features of the tool as of late March 2021. It should be mentioned that the developer continually improves his projects, meaning that this feature list definitely will grow into the future. To recap, this is a tool that helps you add various scripts of various languages to a WordPress website. It also has the capabilities too schedule when these snippets will run, and where they will run via conditions.

I mean… I'm not going to say no to that.

Something to note about this pricing is that it typically rises as additional powerful features are added. We've seen that with Swiss knife pro. In my opinion, this is definitely something that the developer should be doing as this is a valuable tool. For me, the initial purchase was already returning on its investment less than an hour into using it (just due to the sheer time savings).

Because it's created by the same developer behind Swiss Knife Pro, we know for a fact that it will continually improve. There's no future road map, but we're very excited by some of the ideas being thrown around in their official Facebook Group. Needless to say, we typically treat these lifetime deal purchases as investments, especially when there is a reputable developer behind them.

There’s no other plugin on the market that offers an intuitive way to schedule scripts. However, there are two other offerings that potential customers should at least be aware about. First, we have Code Snippets. Code Snippets is a free plugin that many WordPress creators are already aware about. It offers a solid way to add various snippets of code to a WordPress website, but when it comes to calling third party scripts, scheduling anything, or offering an easy to use interface, it falls pretty short.

Another tool, this time paid, is Advanced Scripts (our review on it here). I like this tool because it gives me the ability to set very specific conditions on where a script will run on a website. I typically use custom PHP expressions to toggle scripts, ie is_user_logged_in() && is_home(). SO has conditional features, but nothing this advanced (yet). At the same time, Advanced Scripts has no capabilities for scheduling scripts (via GUI) whatsoever.

I wouldn't look at this like “you must have one or the other”. Any efficient developer has multiple tools for the job, and chooses the best solution for this specific project. In my opinion, if any project requires scheduling scripts, and you'll be surprised at how many use cases there are once you pick up this plugin, Scripts Organizer is the only choice. In some situations, where you have a lot of time sensitive promotions or content, but also need other scripts to be applied via granular conditions, a combination of both tools may make sense.

Scripts Organizer is a welcome addition to our agency toolbox, coming in at a $30 purchase for unlimited licenses and unlimited support. After using it for about a month on several major projects, we realized that there are many use cases for scheduling various scripts, and this also offers a easy way to add third party assets, conditionally apply scripts, and generate shortcodes. Definitely worth a look!

I have a question, if you don't mind me asking.

I'm not really a coder myself, but I found this CodePen SCSS snippet (https://codepen.io/welcomeuniverse/pen/JNwvyL) that I would like to add to my WP website.

I'm just not sure this plugin will make it easier for me to implement the SCSS snippet, in such a way that it would just be a matter of copy-paste the snippet, give the logo / text the correct class name and done.

Do you think this is the plugin that would do the trick? It happens more often that I find neat SCSS snippets which aren't compilable as regular CSS, that I end up not using because of WP's limited SCSS capabilities and my limited coding capabilities (:

It definitely should -- check this out: https://dplugins.com/docs/scripts-organizer/scss-partials/ 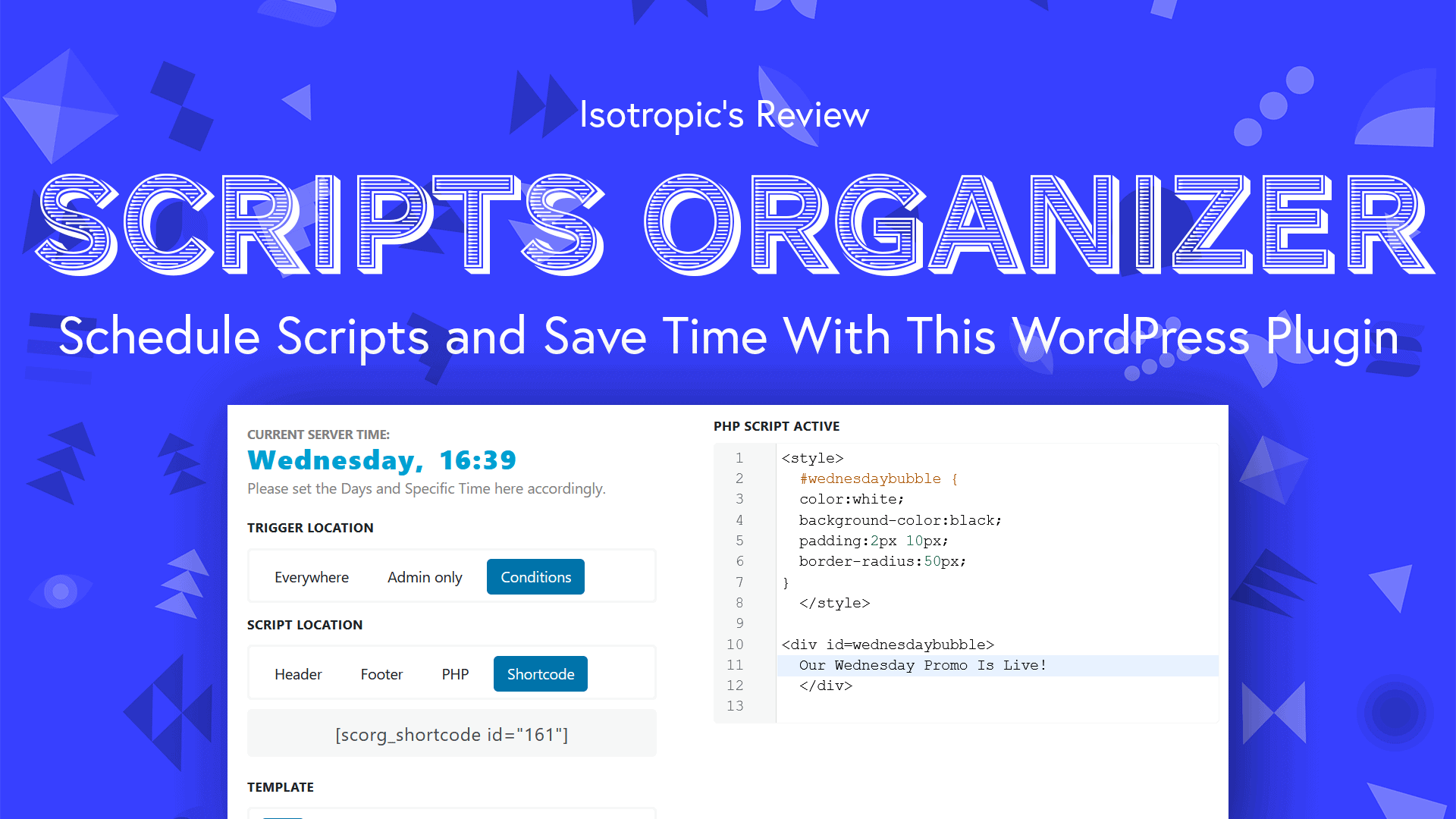