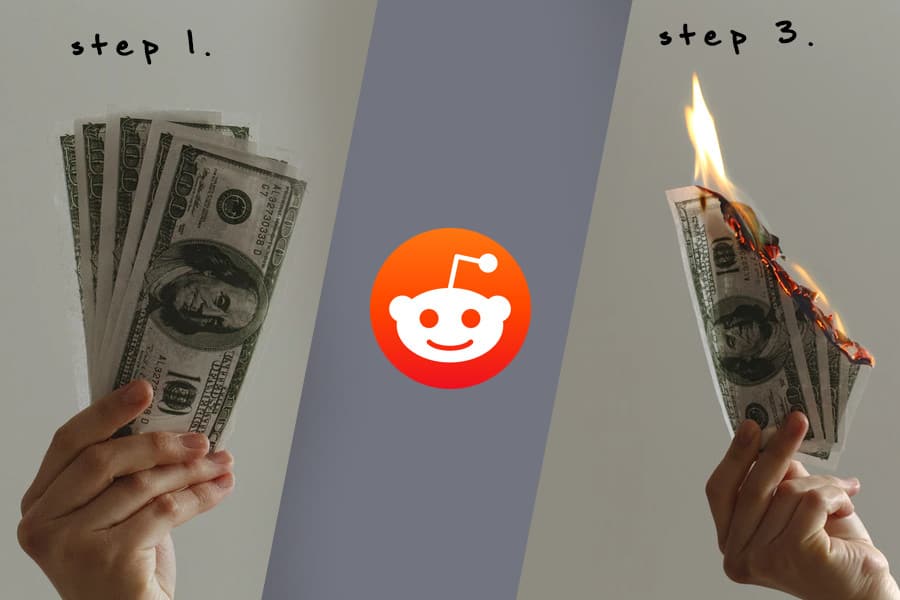 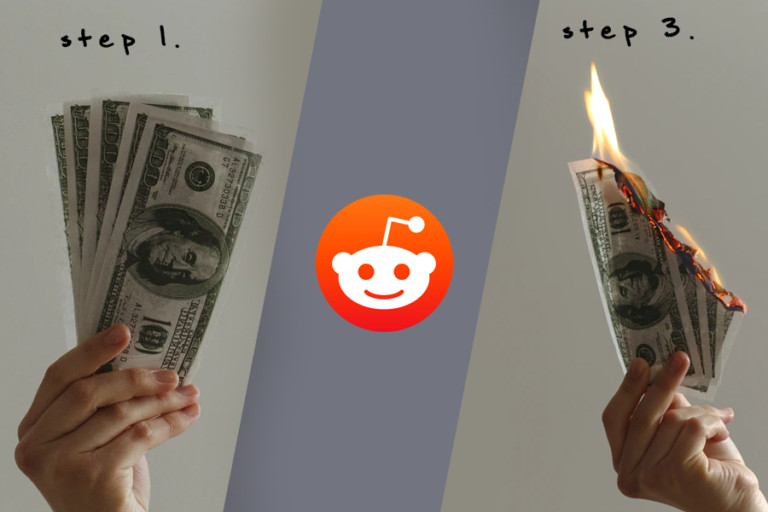 This blog post is a documentation of our experience running Reddit advertising in 2020. Advertising on Reddit is a dangerous prospect, and one that not many people have attempted (or even heard about).

We're going to run through everything... from our experience creating the advertisements, managing the campaigns, the results we got from putting $150 into advertisements over a span of three days, and our concluding thoughts.

We're in this experiment because we wanted to  promote one of our offerings, a new(ish) ebook. We also wanted to explore Reddit advertising in 2020 as we've heard many different messages about it in the past. We’re also soon to be launching several targeted platforms, and wanted to see if Reddit would be a good option for advertising these.

The reason we were attracted to Reddit was because of their hyper targeting capabilities. Users are classified into individual subreddits, each subreddit pertains to a different topic. You can choose which subreddits will receive your advertising. For example, we wanted to advertise our Google PageSpeed book for WordPress. ????

So we only advertised to the WordPress subreddit.  The only way a user would join the subreddit for WordPress is manually, which means they want to be there.

In our opinion, Reddit is the best platform to access super targeted user groups. There's a subreddit for pretty much anything, from mountain biking to French culture.

We also went into this experiment knowing that Reddit was a terrible platform to advertise on, according to pretty much every reputable source on the internet.

The reasoning behind this was that Reddit users are very anti advertisement, and trying to serve advertisements to somebody who doesn't want them to begin with isn't really known to be an effective strategy.

These sources were confirmed when we saw the actual advertising prices that Reddit had to offer.

They were so low that these prices would never be seen on Facebook or Twitter, confirming that Reddit was the odd one out of the bunch. Even still, we decided to test our luck, and purchase some ads.

From what we've read, if you run Reddit ads correctly, you can hit a gold mine of leads and website visitors. But the problem is, you only get it right one out of a hundred times.

From the welcome email Reddit sends when you sign up for their advertising program, the community is amazing, and being able to crack the code with advertising would be extremely valuable:

At Reddit, our mission is to provide a sense of community and belonging to everyone.

More TV and Film fans than IMDB or Hulu

Sponsored posts are the same as typical post, except they already place high on the page. Because they're in the same format, they can gain traction just like typical Reddit posts. But, keep in mind that Reddit users don't really like advertisements, so you only get it right once in awhile.

A good analogy to Reddit advertising is panning for gold. You will spend years panning for gold, and sometimes walk away with nothing. But on the small chance that you find gold, you'll become rich.

From our research, the key to running a successful campaign is offering something that is immensely valuable to a specifically targeted audience. You need to find a problem, solve the problem, and then offer them the solution via your advertisement.

The issue is, if they find a solution to be too expensive, or not valuable enough, your post won't receive any traction, or even worse it will receive hate (not hate hate, just negative comments or down votes).

We decided to advertise an existing ebook that we wrote on WordPress PageSpeed. We noticed that in the WordPress subreddit, PageSpeed and Performance optimization of websites was a big topic that many people had questions about.

Our ebook is a step-by-step reference guide on how to improve the page speed of your website… it's pretty cheap, it offers a whole bunch of value to the intended customer group, and has a collection of good reviews on Amazon. If there's any product to market to the WordPress community on Reddit, this is it.

Now that you understand what Reddit is, why you may want to dip your toe into the advertising pool that it contains, and the downsides of the Reddit community and advertisements... let's discuss the ads that we ran in the results that we got.

Reddit Ads recently redesigned their dashboard, and it actually works and functions very well. It's pretty simple to use, clean, and fast. The previous Reddit ads dashboard was super difficult and dated, so it's a welcome addition.

Creating your campaign is fairly simple, and reminds us of a stripped-down version of the Facebook interface.

You name the campaign and then set your objective. You have a collection of objectives to select, so let's break down these objectives and discuss use cases for each one:

We chose conversions for our advertising goal, as we wanted to convert visitors into paying customers. We also set a budget of $50 per day, which we would run for 3 days.

The video post can run for up to 15 minutes, that's a pretty crazy advertising term. (what's so unfortunate is that the reading platform should  be an advertisers dream --  amazing pricing, big flexibility, super targeted communities…  but it simply doesn't work most of the time).

The title of our advertisement was as follows “We wrote a reference guide (ebook/book) on how to improve your Google PageSpeed scores & site performance”. We wrote it like this because we wanted it to blend in with the typical post on the subreddit that we were targeting.

This title was very similar to somebody who was sharing an article organically.  We were aware of the risk that it would bite us in the back, as Redditors may not like that we were trying to blend our ad with a typical post.

The image we chose to use was a Photoshop mockup of our book, on a high contrast background. This background and color scheme would pop out of the both the traditional white background interface, and the dark mode interface.

This is what the ad looked like in different formats:

We advertised a link to the Amazon listing of our product: isodes.link/ebook.

This meant that we couldn't incorporate the Reddit Tracking Pixel and directly associate link clicks to sales. But, because we had and idea of how much the book was selling before running the ad, we could inprecisely determine how many additional sales this advertisement drove.

If you have a product that you can track (ie. you control the platform that it is  sold on),  you can incorporate the fairly new Reddit Tracking Tixel. It's pretty powerful, and very similar to Facebook's offering:

Track different conversion types by adding additional event code to your website by calling the function rdt('track', 'EventName'). Select from the following events:

After completing the setup of a Reddit ad campaign, we set it to run for 3 days and spend $150. We set their link bid price at $0.80 per click, which would ensure that our ads got placed within those three days.

We ran our ads for three consecutive days. The average cost per click came out to be $0.23, much lower than our bid price, and almost mind-boggling compared to Twitter and Facebook costs. We drove 652 clicks in those 3 days, spent $150 on Advertising, and from that increased our ebook sales by….

13 additional sales. Obviously, that number is not scientific as we can't track specifically the visitor from Reddit via the Amazon Kindle dashboard but compared to the average sales over the past year, we increased our sales running these advertisements by 13 over days.

Basically, we burned $150 on Reddit advertising and had pretty much nothing to show for it. Definitely not anywhere close to a positive return on investment.

If we compare this to Twitter and Facebook campaigns (Same photo, similar copy, and same link to the Amazon listing), the conversion rate was almost nothing.  This was extremely surprising to us, as we were supposed specifically targeting individual subreddits that displayed need for our content.

I also have another ebook targeting Stock Investing (that I wrote years ago), so I decided to run a smaller Reddit campaign to see if it was the actual product that wasn't converting, or if it was the visitors that Reddit was sending our way.

I ran another Reddit campaign advertising an ebook targeting day traders. We drove similar traffic, had similar statistics, and only converted to percent of the clicks to sales.  I haven't recently run a Facebook campaign for that ebook, so I don't have any comparable data, but I'm sure that Facebook or Twitter would have a higher conversion rate than Reddit.

If you really dive into the topic on Google, you'll find that (be sure to get past a SEO fluff articles first) many other marketers experience the same problems. Reddit will drive a lot of traffic to your  business or product, but it will fail to convert. So you have a mentally targeted traffic, great ad rates, but no conversions.

That means running the advertisement is virtually meaningless, unless you're trying to get more brand awareness.  If you are trying to sell a product, you're better off looking towards higher converting sources like Google ads, Facebook, or Twitter.

We stated earlier in the article that if you offered immense value to your viewers, you would be rewarded. They don't care who you are, why you're advertising, or anything like that, as long as you offer them huge content that is relevant and accurate.

We drive tons of targeted visitors to our website through Reddit comments, and investing your advertising spend in somebody who could organically respond to questions on Reddit, or post relevant links in a way that brings value to the community, that would be a much better use of your money than spending it on Reddit advertising.

We'll be publishing a post very soon on the methods that we used to create valuable targeted traffic from Reddit, organically.

From running our own two campaigns, and doing a bunch of research on the topic, it seems like advertising on Reddit, even in 2020, doesn't work. If you think back to our analogy in the beginning of this post, Reddit really is like panning for gold. Unfortunately, our panning expedition turned up with only mud.

We're probably going to revisit Reddit advertising sometime in the future, and attempt to find some gold nuggets, but this try at paid advertising on the platform was a failure.

Yeah, had the same problem. To bad...